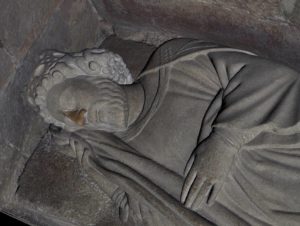 Fernando II was a fundamental king for Compostela Cathedral, driving forward the completion of the works, with the generous life pension granted to Master Mateo in 1168. In 1180, he wrote down his choice of Compostela Cathedral as his burial place and, on his death in 1188, shortly before the lintels of the Pórtico de la Gloria were laid, his son Alfonso IX made every effort to carry out his wishes, which he achieved shortly afterwards. This officially established the Royal Pantheon in Compostela, which already included Ferdinand II’s mother, Berenguela, and his grandfather, Raymond of Burgundy. After the Pantheon was moved to its current location in 1535, there was some confusion in the identification of the tombs. Stylistic studies of the recumbents lead to the conclusion that there was an exchange of identities and that the one traditionally identified with Alfonso IX actually corresponds to Fernando II and vice versa; this piece was dated after the consecration of the cathedral in 1211.