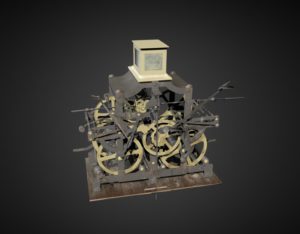 The clock that is in its tower of the Cathedral of Santiago was built in 1831 by Andrés Antelo, from Ferrol and, due to its design and finish, is a benchmark in clockworking. This clock can be interpreted as a symbol of the projection that the high degree of technical knowledge developed in Ferrol had in Galicia from the 18th century, in which the illustrious names of Baleato, Antelo or Comerma, among others, were an example of how the most advanced industry could have roots in this country.
3D model design: Patricia Mañana Borrazás, Alejandro Güimil Fariña and Pablo Aparicio Resco, for Consello da Cultura Galega.