Chalice of Gondar the Precentor 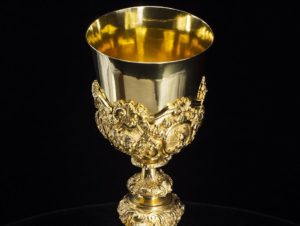 Salamanca, Ignacio Montero, Ca. 1753. Melted and chiseled gold
It is a rococo chalice, richly decorated with Jacobean motifs combined with Eucharistic symbolism, and allegorical and plant elements. It was named after Canon Andrés de Gondar, who held the position of precentor and who was one of the most prominent representatives of the enlightened council of canons of the time. Likewise, this canon had an important role as patron and lover of the arts and endowed the cathedral with major donations. Among them, this piece created in Salamanca, although likely designed in Compostela, and given away in the year 1753, as stated in the inscription on the base.

← Next Previous →
BACK TO TREASURE