Virgin of the Lilies 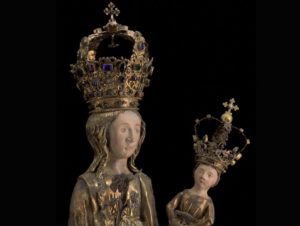 Santiago de Compostela, Attributed to Francesco Marino, first quarter of the 15th century, gilded silver, enamels, and gemstones.
It is one of the pieces of the Compostela Treasure attributed to the Italian silversmith Francesco Marino, who would work in Santiago for the archbishops Lope de Mendoza and Núñez de Isorna and for the Cabildo, who would have commissioned this processional work from one of the most outstanding devotions in the cathedral.
Different elements were added throughout history, such as the reliquary cross in the 16th century, the current crowns in the 17th century, or the current bouquet of lilies in the 18th century. Also, the modernist bracelet, from which a gold coin hangs, which was a gift from King Alfonso XIII. Finally, its pedestal, based on the original, was made by the silversmith Ricardo Martínez after the damages caused by the fire in the Chapel of the Relics in 1921.