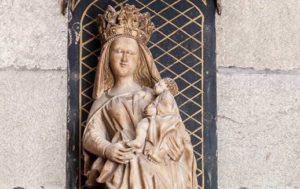 Anonymous, second quarter of the 15th century. Alabaster with remains of polychromy.

This delicate image of polychrome alabaster presided the altarpiece of the chapel of Archbishop Lope de Mendoza, which was located since the middle of the 15th century in the place that currently occupies the Communion Chapel, whose entry was through the opening where the equestrian image of Saint James by Gambino is today. This chapel, intended to house the burials of the prelate and his relatives, was finished years after Don Lope’s death by Martin López, a relative of the archbishop and cardinal of the cathedral; although it was demolished in the last years of the 18th century.
Several pieces belonging to Don Lope’s chapel are preserved in the Museum, although this image of the Virgin of Forgiveness was placed, in the early years of the 20th century, on the entry portico of the new chapel, where it remains today.
Made by an unknown artist, this piece of Burgundian and Rhineland influence sits on a base, also made of alabaster, in which the archbishop in an attitude of praying and his shield are represented, as well as the inscription “Memento mei” (remember me), in line with the funerary character of the chapel.