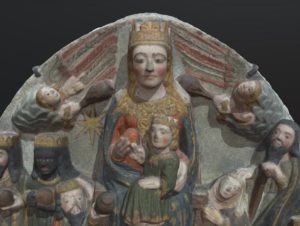 The so-called Tympanum of Doña Leonor was located in a chapel near the western façade of the cathedral. Like others in the city of Santiago, it is based on the model that Master Mateo made for the cover of the retrochoir.
An inscription, CAPELLA: DONA: LEONOR, confirms the identity of the donor, founder of the chapel in 1323, whose portrait appears on one side next to Saint Joseph, while the Three Wise Men can be seen on the other side. In the centre, Mary enthroned with the Child, and two thurifer angels at the top.
After being removed from its original location, it was moved around several locations in the cathedral until its integration into the Museum’s collection.