The Virgin and Child with Saint Anne 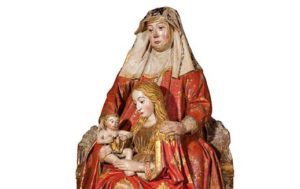 This piece, attributed to the Burgundian master Nicolás de Chaterenne, who worked at the time in the cathedral and in the neighbouring Royal Hospital, may have belonged to the altar dedicated to Saint Anne in Don Lope de Mendoza’s chapel.
It follows the iconographic model of the Triple Saint Anne, which was particularly developed in the 15th century in the Germanic world, which deals with the human genealogy of Jesus represented as a Child in the arms of his Mother, who is protected by her mother Saint Anne, outstanding in the hierarchical approach of the set.