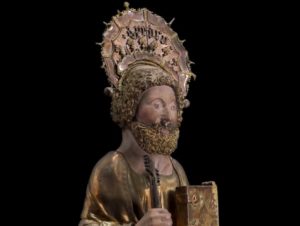 This piece is part of the set of images of devotion commissioned by Archbishop Lope de Mendoza for his private oratory, later acquired by his successor Álvaro Núñez de Isorna, and which were incorporated into the Cathedral Treasure. Five of these images are preserved, images of single faces and in which each character is identified by their respective attributes. In the case of Saint Peter, he is identified by the book and the keys that he carries in his left and right hands, respectively, as well as by the inscription on his crown in gothic lettering.