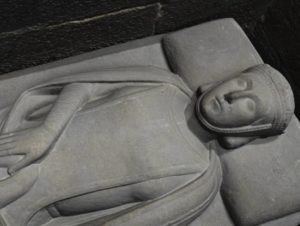 Although there is evidence that King Alfonso VII wished to be buried in the Cathedral of Santiago with his father, Raimundo de Borgoña, at his death in 1157 he was buried in the Cathedral of Toledo. On the other hand, his wife Berenguela de Barcelona, who died in 1149, would be buried in Compostela following, in her funeral, the ceremonial arranged by her husband years before.
Compared to what happens with other tombs of the Royal Pantheon of Compostela, in this case, the identity of the character represented is clear. However, this would not be the original tomb, since stylistic details and the clothing of the lying image take this piece back to the year 1230, date of the death of King Alfonso IX and the official constitution of the Royal Pantheon. At this time, adaptation works were carried out in the chapel, along with other actions, as well as the construction of this new tomb that is an outstanding example of funeral sculpture from the first third of the 13th century.