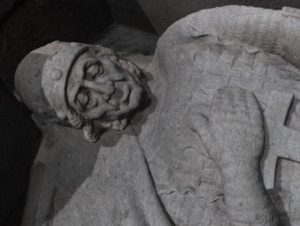 Pedro Froilaz, Count of Traba, was a relevant character in the history of Galicia in the transition from the 11th century to the 12th century. He was one of the most loyal collaborators of Raimundo de Borgoña and, after his death, he took charge of the education of the soon to be King Alfonso VII. In the first decades of the 12th century, he and Diego Gelmírez were the main people responsible for the power that the See of Compostela acquired.
After his death in 1126, he was buried in the Cathedral of Santiago and, eight centuries later, in 1926, his remains were transferred to the Royal Pantheon. Maximino Magariños was given the task to make a new sepulchre with a lying image of the character, represented as an elderly man dressed in armor, carrying a sword in his hands and with a whippet at his feet. In the inscription on the front he is identified as “tutor” of the monarch due to his work.