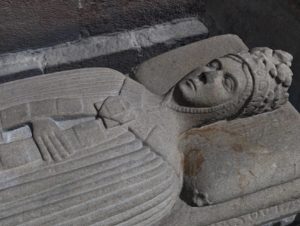 The Royal Pantheon of Compostela was officially established with Alfonso IX, although the Borgoña dynasty was closed, as well as the independent kingdom of Galicia and León, which came to be unified with the kingdom of Castile and Ferdinand III the Saint. Some time later, in 1374, Juana de Castro died. She was queen consort of Castile and León after her failed marriage in 1354 with Pedro I, with whom she would never live. Despite this, she held the title of Queen until her death and, as such, was buried in the Cathedral of Santiago.
Her sepulchre, attributed to a Compostela workshop active at the time, was detached, unlike the rest of the pieces that made up the Royal Chapel, thus raising some doubts about its original location. In the transfer from the Pantheon to its current location in the year 1535, this piece, like the others, was embedded in one of the niches, leaving part of its decoration unseen.

Previous →
BACK TO ROYAL PANTHEON