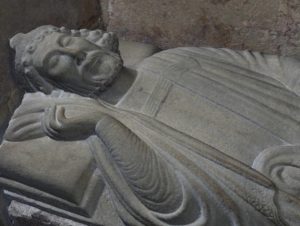 Traditionally, this tomb was identified as the the tomb of his father, Fernando II, although stylistic details seem to take the piece back to a later moment that would fit chronologically with the date of the death of Alfonso IX in 1230.
Although he should have been crowned Alfonso VIII because he was King of Galicia and León, the traditional historiography assigned him IX to differentiate him from his cousin, King of Castile at that time. Alfonso IX was an important monarch for Galicia. He founded several cities, A Coruña among them, and firmly supported the See of Compostela and the pilgrimages to Santiago. The solemn ceremony of consecration of the cathedral took place under his reign on 1211, April 21, which he attended with his eldest son Fernando Alfonso and with the main figures of his court. He died in Sarria in September 1230 during a pilgrimage to Compostela and was buried in the Royal Pantheon that was institutionally formed during his reign.