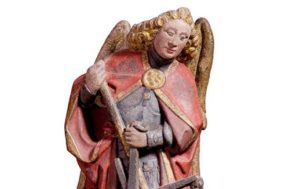 Coimbra, Attributed to Joao Afonso, second half of the 15th century. Polychrome limestone

Traditionally, this image has been related to the one that, according to the chronicles, crowned the so-called Angel Tower or Saint Michael Tower, which was located in one of the angles of the north façade of the cathedral. However, the characteristics of the piece and its state of preservation do not seem to correspond to the time of exposure to outdoor conditions. It is possible that it was somehow related to the tower but not outside, rather in a chapel inside the tower under the dedication to Saint Michael.
Stylistically, it corresponds to the work of the Coimbra workshops of the time and it has been attributed to Joao Afonso, Mestre das Alhadas, although it could also have been created in Compostela by a Portuguese master active in the city at the time.