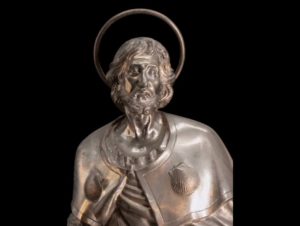 In 1879, an event of special relevance took place for the revival of the Jacobean phenomenon: the rediscovery of the remains of Saint James the Greater, hidden in the cathedral since 1589. Years later, in 1884, Pope Leo XIII promulgated the Bull Deus Omnipotens ensuring that the remains found were really those of Saint James and encouraging the restart of the pilgrimages to Compostela. All this involved the adaptation of the Apostolic Tomb, which acquired the current arrangement with access to a crypt through the sides of the altar of the cathedral. For this reason, the Cabildo commissioned a new image of Saint James to the Compostela silversmith Ricardo Martínez, who carried out many works for the cathedral. The author masterfully worked the silver to create the image, placed on a high plinth which endows it with great majesty, following the model of Saint James the pilgrim made by Valadier for one of the baroque candle holders of the main chapel.