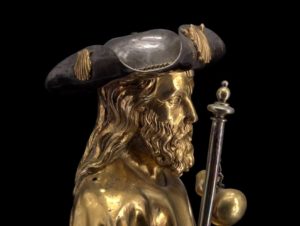 The broad base of this statuette shows the pilgrimage offering of the French knight Johannes Roucel (Jean de Roussay) and his wife Johana, whose weapons appear on the shields that flank the text. Both characters held leading positions in the court at the time and would have gone on pilgrimage to Compostela in the early years of the 15th century. In this image, it can be seen that progress has been made in the iconography of Saint James as a pilgrim. Besides his apostolic character, represented with the book or the long cape, more attributes typical of the pilgrimage have been added, such as the staff, the pumpkin, the bag, and the scallop shell that stands out in the wide hat that the figure wears.