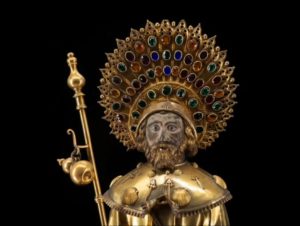 This image of devotion was commissioned by the archbishop Álvaro Núñez de Isorna for his particular devotion to the silversmith Francesco Marino, of Italian origin but active in Compostela. The prelate’s weapons are those that appear on the front of the hexagonal base of the piece, on which the statuette – reliquary is arranged. As stated in the cover of the book that the image holds in his left hand, a small textile relic of Santiago is kept safe. Although it has some additions that replace its original elements, such as the big crown, the staff with the pumpkin, and the cape, all of them from the 17th century, it is proof of the consolidation of the image of Saint James as a pilgrim and the attributes that will be characteristic of the model.