Saint james the Moor-Slayer of the Duchess of Aveiro 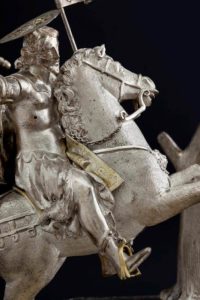 The representations of the legendary appearance of Saint James in the Battle of Clavijo were highly developed in the Baroque period, mainly in the Compostela cathedral. However, this piece was probably made shortly before in a Roman workshop as an offering to the apostle made by Álvaro de Valenzuela and Mendoza at the request of Mrs. María de Guadalupe de Lencastre y Cárdenas, Duchess of Aveiro and one of the main figures of the Portuguese nobility of the time.