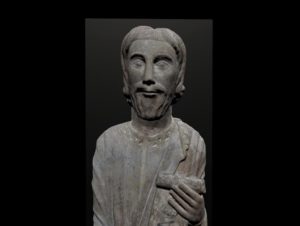 Compostela workshop under Mateo’s influence. Ca. 1225. Granite with remains of polychromy
The cult of the “other Saint James” of the cathedral was relevant since the Gelmírez era when Urraca gave the archbishop his head relic, which was kept in a golden ark. In the 14th century, Berenguel de Landoria commissioned a new reliquary, which became one of the most outstanding pieces of the cathedral treasure.
This piece, related to the cult of Saint James the Less, was placed in the Crypt of the Portico of Glory for centuries until it was recently moved to the Museum after its restoration.
It is a stylish polychrome sculpture clearly made under Mateo’s influence and reminiscent in its conception of the column statues of the Portico, although with a clear evolution towards the Gothic style and different sculptural quality. He is upright looking ahead and holds in his hands a narrow scroll that crosses his chest with the inscription “S. IACOBUS MINOR”.