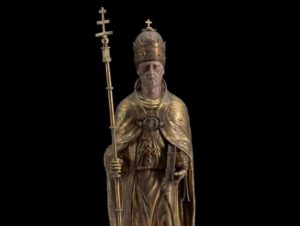 The creation of this piece, at the time of Archbishop Juan de Sanclemente, and probably commissioned by one of the silversmiths of the Cedeira family, who was of Portuguese origin and settled in Compostela decades before, would correspond to the arrival at the cathedral, from Rome, of a relic of this saint, protector against the rays that had damaged the cathedral on several occasions at the time.