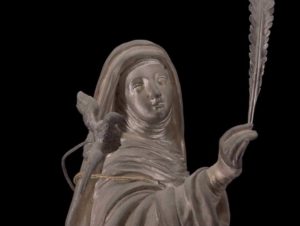 Despite the controversy raised in the 17th century between Saint James and Saint Teresa due to the patronage of Spain, there was always an important devotion to this saint in the cathedral. This devotion increased in the central years of the 18th century, leading to the foundation of a convent of the Carmelite Order in the city and, later on, the arrival at the cathedral of a relic of Saint Teresa for which, in 1804, an image was commissioned to the Compostela silversmith Francisco Pecul, of French origin but settled in Madrid. The relic, a tooth of the saint, is kept in the oval medallion that the figure wears on the chest. It is a piece that suggests a lot of movement and represents a moment of inspiration for Saint Teresa as she prepares to write on the open book that she holds in her left hand.