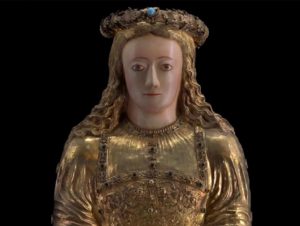 The Portuguese silversmith Jorge Cedeira the Elder, started in Compostela, where he settled in 1542, a great saga of silversmiths who left their mark on the city and its cathedral. Of note among the works he carried out for the Church of Santiago is this reliquary, which was commissioned by the Cabildo, in 1553, to house the relics of Saint Pauline, one of the holy martyrs whose remains had been brought by Cardinal Gaspar de Save after his journey across Italy and Germany as part of the entourage of King Charles I of Spain.