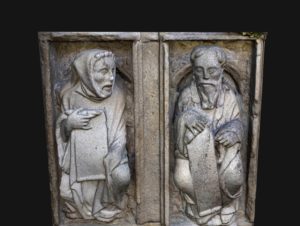 The sculptures identified as the representations of Malachi the prophet and Saint Mark the Evangelist are part of the set of pieces that crowned the outer façades of Master Mateo’s choir and that, after its demolition, ended up being placed on the façade of the Holy Door. In this case, they are located in the upper part of the last section on the right side of this façade.
Malachi, “the messenger of God”, the last prophet of the Old Testament, was part of the group of the minor prophets located in the last section of the north side of the choir, next to Zechariah, Aegeo, and a fourth figure that has not been preserved. He stands out for his hood, bold posture and, as usual in his iconography, a large scroll that he carries in his right hand.
Saint Mark, along with the rest of the Evangelists, would be located in the last section of the façade on the south side of Mateo’s choir holding a large vertical scroll.