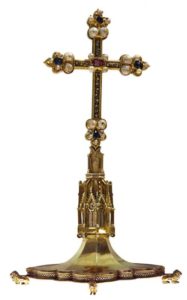 Due to its stylistic characteristics, it is believed to have been created in a Parisian workshop in the last decades of the 14th century, and its presence in the Compostela Treasure would correspond to a pilgrimage offering yet to be identified and prior to the year 1426, when it already appears collected in inventories. Later on, in the first decades of the 16th century, it underwent some modifications after the removal of some stones, which are mentioned in previous descriptions, and the placement of new ones.