Cape of the Apostle Saint James 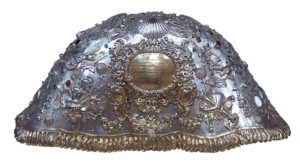 In 1211, on the occasion of the solemn consecration of the Compostela Cathedral, Master Mateo completed his project in the cathedral with a seated image of Saint James that followed the model of his homonym in the mullion of the Portico of Glory, and that would be used from then on as a point of reference for the faithful and pilgrims, as it is located above the apostolic tomb.
Some time later, since the final years of the 17th century, Archbishop Antonio de Monroy promoted the transformation of the main chapel and, besides other actions, ordered the commission in 1704 of a silver cape for that medieval image, which had already undergone some previous transformations. The silversmith from Salamanca, Juan de Figueroa, was put in charge of the new cape, adjusted to the bust of the sculpture, as stated in the inscription on its reverse.
The cape was worn out by thousands of hugs and replaced in 2004 by a replica that is currently on display in the Cathedral’s Treasure.