Virtual reconstruction of the Door Francíxena 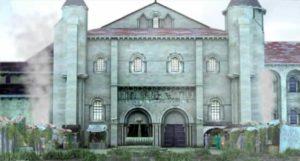 The Gelmírez period, which includes Diego Gelmírez’s forty years of episcopacy, was of key importance in the consolidation of the See of Compostela, which ended up becoming a metropolitan one in 1120. Likewise, a fundamental stage was experienced in the progress of the construction of the Romanesque Cathedral, with a new constructive and iconographic program and a new team of masters of possible foreign origin and clear French influence.
One of the most important aspects of this new era was the construction of large portals with sculptural decoration on the façades of the transept. One of these portals is the Platerías façade, modified at different times due to a possible change of the original program. Another one is the Paradise façade, with some pieces that were relocated in the Platerías façade, as well as other reliefs and sculptures preserved in the Cathedral Museum; it is also known as the Porta Francígena as this is the cathedral entrance for pilgrims. This façade was replaced in the central years of the 18th century by the current one of the Azabachería.
Thanks to the study of the remains that have been preserved, as well as the detailed description that appears in the Liber Sancti Iacobi written at the time of the Archbishop Gelmírez, among others, it was possible to carry out under the direction of M. Castiñeiras and V. Nodar this hypothetical virtual reconstruction of the aforementioned façade, as well as another one of the Paradisus that appeared before the façade, emulating the Roman example. It was presided by a great fountain and the place where different ceremonies were held and different sales stalls for pilgrims were set up.