The Rebuke of Adam and Eve 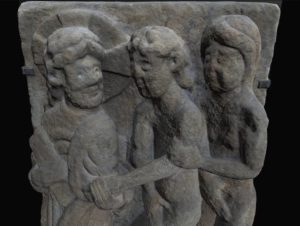 Attributed to Master of Betrayal. First-quarter of the 12th century. Granite

The original location of this relief is known thanks to the description of the Paradise façade that appears in the Codex Calixtinus. It was paired with that of the Expulsion from Paradise that was relocated in the Platerias façade. After the demolition of the façade in the middle of the 18th century, the piece was missing for a while, until its discovery at the beginning of the 20th century in a house on the Compostela Pitelos Street. From there, it became part of the Blanco-Cicerón Collection, until its heirs transferred it to the Cathedral Museum.
It represents the moment in which God rebukes Adam and Eve for their sin while they try to hide their nakedness; a passage from the Genesis that continued in the iconographic discourse of the façade in the mentioned relief of the Expulsion, today located in Platerías.