The Month of February 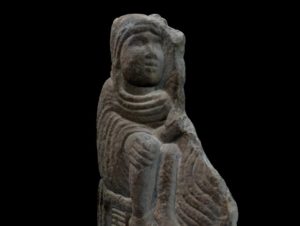 It is one of the reliefs belonging to the missing Paradise Façade of the cathedral that have been recovered. This facade was replaced in the central decades of the 18th century by the current one of the Azabachería and pilgrims in the medieval era used it to enter the cathedral, hence it also received the name of Porta Francígena.
Its iconographic program and sculptural decoration are carefully described in the Codex Calixtinus, alluding, among other elements, to a set of reliefs that were on the doors of the left side, in which the months of the year were represented. One of those reliefs would be this one, in which a man appears warming himself next to the fire and that would correspond to the month of February.