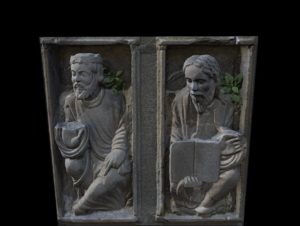 The first section on the left of the façade of the Holy Door is topped by the figures of King Solomon and Moses from Master Mateo’s choir. Both figures would originally be placed at the respective ends of façade crown of the choir in which, as a prefiguration of Christ, the images of Moses, his brother Aaron, and Samuel would be placed to the left of the tympanum of the Epiphany, with the kings of Judah, Saul, David, and Solomon on the other side. A similar content also appeared in the sculptural set of the outer façade of the Portico of Glory.
Solomon repeats the iconographic model used by Mateo on the façade of the Portico, where he was once again paired with his father David, and on the inner cresting of the choir where he faced the Queen of Sheba, raising and showing the palm of his right hand bordered by the cape. Regarding Moses, he recalls his homonym on the Portico.