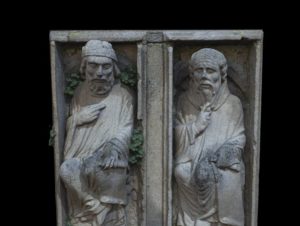 Master Mateo and his workshop. Ca. 1200. Granite
The figures from Master Mateo’s choir which occupy the intermediate level in the second section on the left side of the façade of the Holy Door have been identified as Saul and Zechariah.
The south side of the choir façade was crowned by the images of the kings of Judah, a series that following a chronological order would begin with Saul, the first of them and a character underrepresented in the Middle Ages. His nostalgic look shows psychological introspection with the character of the represented, who brings his right hand to his chest, crosses his legs and holds a vertical scroll with his left hand.
The prophet Zechariah would be accompanied by Malachi and Aegeus in the last section on the north side of the choir. They are the last prophets and they have many aspects in common. The figure’s head stands out in a special way with Mateo’s curly hair and a long intertwined beard whose hair he pulls out with the right hand.