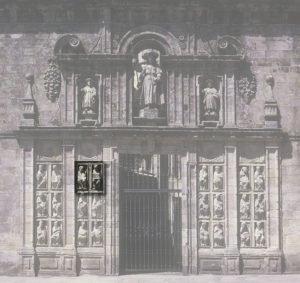 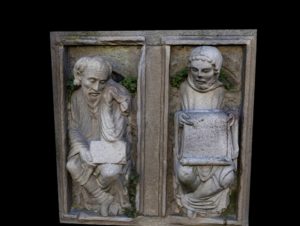 Belonging to the group of biblical characters that crowned the façades of Master Mateo’s choir and that were reused in the façade of the Holy Door, the images identified as Saint Luke and Aegeo the prophet, are currently located in the upper part of the second section on the left side of this façade.
Originally in Mateo’s choir, Saint Luke would share with the rest of the Evangelists the fourth section of the south side façade. He is depicted with his body and head tilted, a face with a long curly beard and crossed legs. Thoughtfully, he rests his left arm on the book he holds on his lap.
Aegeo would share the space in the last section of the north façade with the group of the “last prophets”, together with Zechariah and Malachi. Self-proclaimed “messenger of the Lord”, he stands out for the wide scroll that he unfolds on his chest with both hands.