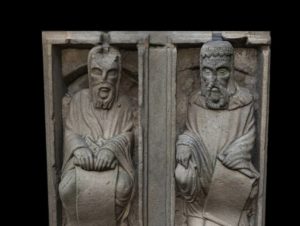 Master Mateo and his workshop. Ca. 1200. Granite
The images today located at the bottom of the second section on the left side of the Holy Door façade have been identified as the apostles Andrew and Simon, respectively.
The first one began in Mateo’s choir the second section of its southern façade, with his body slightly inclined to the left to dialogue with his pair, Saint Philip, who turns to the opposite side. Its current head was added in the mid-19th century, distorting the appearance of the sculpture.
Following the order of the apostolic college in the Gospel of Saint Matthew, Simon would close the group of the apostles in the fourth section of the south façade of the choir. He also has a head that was added in the mid-19th century and he stands out for the short cape that he wears and for holding with his left hand veiled by the cape a scroll that comes down to his feet.