Rosette of the façade 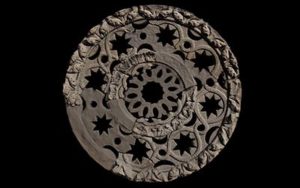 Lighting played a key role in the sacred scenery created by Master Mateo in the Cathedral of Compostela. This is the reason for the importance of the open bays on the outer façade of the Portico of Glory, open on its cover by a large central arch and, above this, the complex tracery rosette that had two replicas on the smaller side doors. These rosettes can be seen in the drawing made by the canon José Vega y Verdugo around 1657 and were removed with the rest of the façade when it was replaced by the Obradoiro façade. Other reasons for these works would be the poor state of preservation and the difficult preservation of this central rosette, which had leaded stained glass windows since the 16th century.
The Cathedral Museum exhibits a hypothetical assembly of one of those rosettes, decorated with intertwined bands and stars, from several recovered fragments.

← Next
BACK OUTER FAÇADE OF THE PORTICO OF GLORY