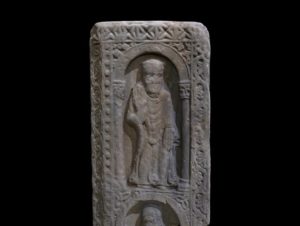 Attributed to a Béarnaise workshop active in Compostela. Ca. 1150. Marble
This relief fragment currently preserved in the Cathedral Museum could have come from the neighbouring Monastery of Antealtares, where it was found in the 1940s.
It has been attributed to a Béarnaise training workshop, active in Compostela in the central years of the 12th century, that would possibly work on the remodeling of Antealtares that included a new altar and a cover, to which this piece would belong, perhaps to one of its jambs on the chamfered side.
The crowned female figure that remains intact, located under semicircular arches, with the right hand outstretched, has been identified as a Virgin of the Annunciation, which would be completed, on the other side, with the relief of the Archangel.
The plate would continue with another female image, of which only the head remains, which is located under an architecture similar to the previous one.

BACK TO OTHER SPACES