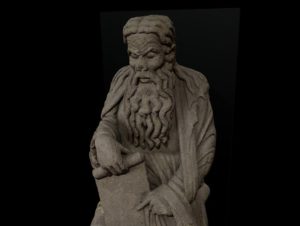 Around 1520, the outer façade of the Portico of Glory, which until then had been permanently open, was renovated to include outer doors that forced the removal of some architectural elements and the sculptural ensemble that set it up. Several of these figures have reached our days after living an interesting journey that caused the scattering of the ensemble.
Among those images, it can be found this sculpture identified as a representation of Isaac the prophet. Together with his partner, who could be Abraham, they were acquired in 1948 by the Santiago City Council from the Count of Ximonde, although they are currently located in the Pazo de Meirás in Sada, a town in Coruña.
Both sculptures might have been originally column statues; and they could have flanked the north side door of Mateo’s façade, connecting with the program of the arch on that side of the Portico of Glory and acting as prefigurations of Christ.