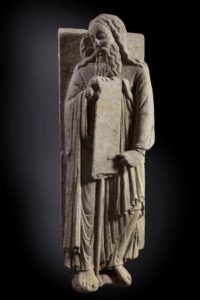 Master Mateo and his workshop Ca. 1200. Granite
Like its pair, identified as Elijah, it was part of the sculptural ensemble of the outer façade of the Portico of Glory, from which they were removed in its reform in the year 1520. They currently belong to the Pontevedra Museum, which acquired them from the Count of Ximonde in 1956.
Both images carry tau shaped canes and show fearless postures that cause the movement of the rest of the body and fold in the clothing, both retain the halo behind their heads, wear a robe and a cloak and represent elderly people with thick beards, in one of the cases of greater length and braided ending in a point over the chest. The two characters, located in two jambs preceding the access to the Portico would act, within the iconographic program developed by Master Mateo, as hypothetical living witnesses of the Last Judgment.