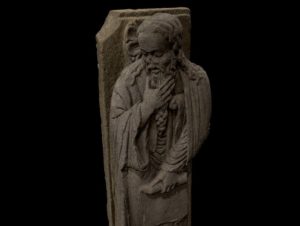 Master Mateo and his workshop. Ca. 1200. Granite
This high-relief plaque comes from the missing outer façade of the Portico of Glory, in which it would have been located in one of its jambs, paired with another piece that, like this one, is also preserved in the Pontevedra Museum and has been identified as Enoch; both prophets, witnesses of the end of time as represented in the tympanum of the Portico of Glory.
Like other pieces from the aforementioned façade that were removed from it in the reform carried out in 1520, both reliefs had an interesting journey that led them to the house of the Ximonde family in Vedra and, after its exhibition in 1909 at the San Clemente College in Santiago, they were placed in 1928 in the Cathedral Museum. They remained there until shortly before their acquisition in 1956 by the Pontevedra Museum, to whose funds they currently belong.