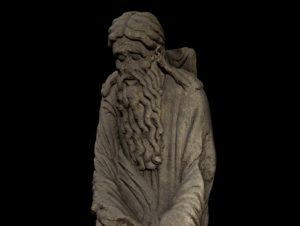 This image, probably located on each side of the north side door of the outer façade of the Portico of Glory, would match with the one identified as Isaac; two of the Old Testament patriarchs, father and son, who would act as prefigurations of Christ. In this way, they would complete the precursor message of the façade, which was directly connected to the interior of the Portico.
Like its partner and other sculptures, it was removed from the façade in the years 1520 and 1521 and was later placed in the neighbouring College of Fonseca. From there they went to the Pazo of the Ximonde family in Vedra and, finally, they were acquired by the Compostela City Council in 1948, as evidenced by the preserved purchase document. However, without having further details, the two pieces are currently in the Pazo de Meirás, owned by the heirs of Francisco Franco.