Outside wall tower of the Choir 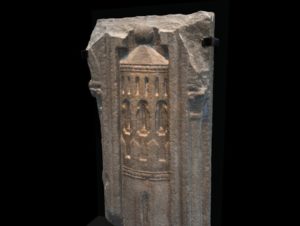 The cresting of the outer fence of Master Mateo’s choir was decorated with a sequence of figures of Biblical characters, four in each section between columns of the cathedral, separated by architectural elements in the form of pyramid-shaped turrets. They represent, in an apocalyptic discourse, the walls behind which the City of God stands. Due to the morphological characteristics of these pieces, fairly regular rectangular blocks were reused after the demolition of the choir as construction materials in other parts of the cathedral, allowing the recovery, at different times, of several of these towers; some of them are exhibited permanently in the Cathedral Museum.