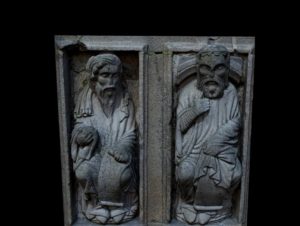 The sculptures identified as the prophet Obadiah and Saint Thomas, coming from Master Mateo’s stone choir, are currently found at the bottom of the first section on the right of the façade of the Holy Door.
Obadiah, the prophet who lived in the time of King Nebuchadnezzar, would be part of the first group of the minor prophets who would occupy, after the major ones, the second section of the north façade of the choir, along with Joel, Hosea, and a fourth image that has not been preserved. Like his partners, he wears a “simlah”, a heavy cloak that is tied around his neck to cover the head, and a “paenula” cloak.
The sculpture identified as Saint Thomas would close the group of apostles present in the second section of the south façade, along with Andrew, Philip, and Bartholomew. As was the case with other pieces in the ensemble of the twenty-four elders, his head was added in the mid-19th century by the sculptor Ventura da Fonte, distorting this piece’s original personality.