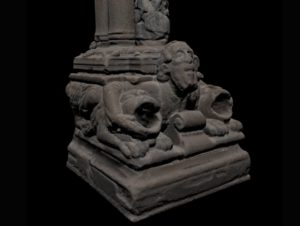 Master Mateo and his workshop. Ca. 1188. Granite and marble

The mullion can be found in the central part of the Portico, holding the great tympanum where the Glory presided by Christ the redeemer of Man and triumphant over death is represented. It is formed by a thick pillar of a single granite piece and a bundle of columns among which the central one in marble stands out, in which the Tree of Jesse is represented, that is the human genealogy of Christ. The column’s capital represents the Trinity, the divine nature of Jesus.
All of this is set on a base in which a bearded figure is represented, astride above two lions with their jaws open; a character who has been given different identifications: Samson, Adam, Gilgamesh, and who might be related to Daniel in the Lion’s Den.
Behind, it can be found a singular image of a man kneeling, the Saint of the Bumps, a probable self-portrait of Master Mateo himself at the foot of his masterpiece.

BACK TO PORTICO OF GLORY