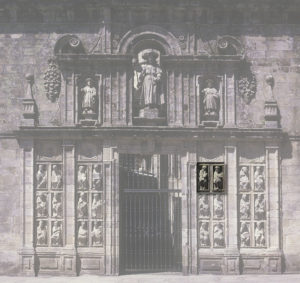 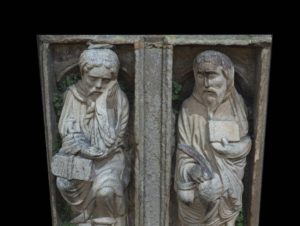 The figures from Master Mateo’s stone choir that make up the upper part of the first section on the right side of the Platerias façade are those identified as the prophets Micah and Hosea.
The first one would occupy the second place in the third section of the north façade of the choir. He stands out for his thoughtful look, with his head resting on his left hand and his right arm resting on a book tied by a strap. He has a long braided beard and his head covered with a “simlah”, like other minor prophets in the set.
As for the image identified as Hosea, it would close the first group of minor prophets in the second section of the north façade of the choir. He also has his head covered with a “simlah” and an expressive face with his mouth ajar, half-closed eyes, and a long beard that is intertwined.