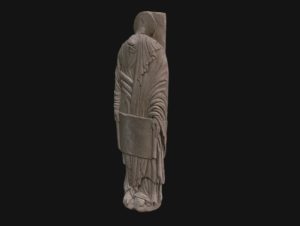 It is one of the column statues that formed the outer façade that completed the iconographic program of the Portico of Glory. This piece was recovered in 2016 buried in a hole in one of the towers of the Obradoiro façade and its discovery has been of great importance for the knowledge of the sculptural ensemble of the cover.
Due to his disposition, bare feet, halo and large horizontal scroll that he holds with his hands, today completely erased, and fit in the message, he has been identified as one of the minor prophets who would probably be part of the groundbreaking and announcing message of the façade. In this sense, it could be Malachi, Haggai, Zechariah, or Jonah.