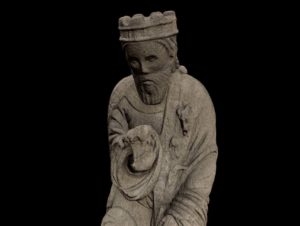 This statue, which represents King Solomon, was created for the façade of the Portico of Glory and, after the modification made in the 16th century, it was removed from its original location and later moved to the parapet of the lodge that completes the Baroque staircase of the Obradoiro square.
Despite its deterioration, a work of great sculptural quality is appreciated, in which Solomon is shown sitting in a scissor chair with lion heads at the ends. His clothes have many folds, producing strong light contrasts. There is no doubt about his identification, he shows his right hand bordered by the cape and he holds the sceptre with his left hand, resting on his chest, and he is crowned. The head, however, is somewhat out of place with the rest of the figure as it is an addition, probably from the 18th century, after the loss of the original one, perhaps due to a lightning strike.