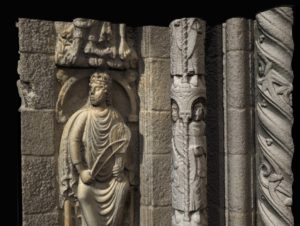 The delicate image in relief of David the musician defeating the devil, today located on the left buttress of the Platerías façade, is part of the set of pieces that were once transferred from the Paradise façade. There, together with other slabs of similar format and characteristics, it would form a group focused on addressing the promise of Redemption, for the medieval spectator, that would be developed in-depth within the Platerías program.
This piece, along with others with similar characteristics: faces with swollen cheeks, detailed anatomical work, and contrasted modelling on the cloths, has been attributed to the so-called Master of the Porta Francígena, who would have programmed and directed the construction work on this façade whereby pilgrims entered the cathedral.
Its current location, sculptural quality, and good state of preservation have turned this piece into one of the medieval icons of the Compostela Cathedral.