Keystones of the punishment of the lecherous 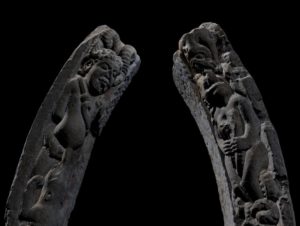 Both pieces must have been part of the original western façade of the cathedral, probably located on its south side, in relation to the theme developed immediately afterward in the Portico of Glory. They would be removed from their original location from 1738 onwards, when the construction of the current Baroque Obradoiro façade began.
The punishment of the sin of lust is represented in its reliefs, with an exemplary purpose for the medieval spectator. In one of them, it can be seen a naked man surrounded by a snake biting his inner thigh, while another reptile swallows his penis. The other represents a woman whose breasts are bitten by two snakes, while other animals damage her face and legs.