Keystone of the central arch 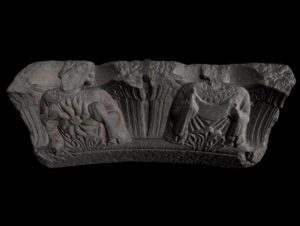 Master Mateo and his workshop. Ca. 1200. Granite with remains of polychromy

Among the different architectural fragments with sculptural decoration attributed to the missing outer façade of the Portico of Glory, several pieces are preserved that would come from the three archivolts that formed its great central arch, through which the Portico opened stately to the exterior. These elements would have been removed around the year 1520, on the occasion of the remodeling of the cover aimed to place doors on it.
One of the recovered pieces would correspond to the keystone of the arch’s main archivolt and, as in the vaults of the crypt, star-bearer (astrophore) angels are represented, holding the sun and the moon in their hands, respectively. They symbolize, within the iconographic program that takes place in the Portico of Glory, the earthly world that needs the stars to be enlightened, in front of the City of God in which the Light is the Lamb..

← Next Previous →
BACK OUTER FAÇADE OF THE PORTICO OF GLORY