Head of a column statue 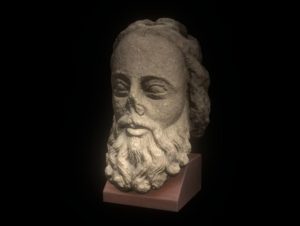 This piece was found at the end of the decade of the 80s of the 20th century in the works of a private house located on the outskirts of the city of Santiago; there it had been reused, at an undetermined moment, as construction material to support one of the beams of the house. In 2016 the piece was displayed to the public for the first time and, afterward, it was generously deposited by its owner, on a temporary basis, in the Cathedral Museum.
It is part, along with other pieces, of the sculptural ensemble coming from the outer façade of the Portico of Glory, dismantled in 1520 due to renovation works. The sculptures were removed and scattered, thus only some of them have been recovered.
This delicate and beautiful head, certainly the work of a great sculptor of the time, complies with the characteristics of the column statues of the Portico and presents the particularity of being detached to the body that completed it.