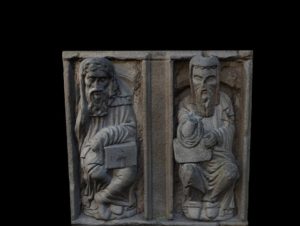 The sculptures identified as the prophets Habakkuk and Jonah, from Master Mateo’s choir, can be seen at the bottom of the second section on the right side of the façade of the Holy Door.
Both pieces would start and end, respectively, the group of the minor prophets of the third section of the north façade of the choir, along with Nahum and Micah. Following the arrangement of the façade from right to left, the first would be Jonah, whose current head should have been added in the mid-19th century. Like his partners, he has a thoughtful look with his head resting on his right hand while holding a closed book on his lap. The group of this section would be complete with Habakkuk, who is also thoughtful, with his eyes down, leaning on the book he holds on his lap and wearing a “simlah” untied that covers his head.