Figure of John the Apostle? 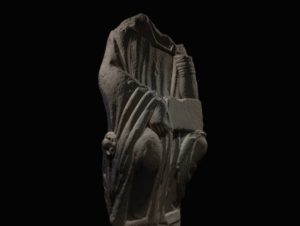 Master Mateo and his workshop. Ca. 1200. Granite
In the first section of the south façade of Master Mateo’s choir, the sequence of characters of the pillar on the right side of the central part of the Portico of Glory formed by the apostles Peter, Paul, James, and John would be repeated. This piece that is currently on display in the Cathedral Museum has been identified as John, after its discovery in 1988, when it functioned as construction material in a wall of the so-called “buchería”, located in the basements of the cloister.
The character would rest his chin on his left hand with a thoughtful look, while a closed book placed on his knee would offer support to his elbow.
It presents a particularity that gives it a special value among the remains recovered from Mateo’s choir. There is a relief on its back in which the manes and the tail of a lion can be seen that coincide in shape and dimensions with the lions represented in the Portico of Glory, thus showing previous reuse within the workshop.