Figure of a knight with a sword 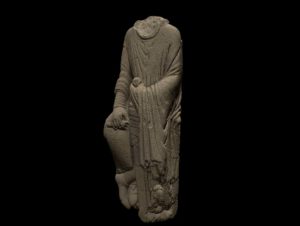 A figure that is difficult to identify, it has been traditionally attributed to the group of sculptures that formed the sculptural ensemble of the outer façade of the Portico of Glory and that were scattered after its removal around the year 1520. It has some characteristics that could frame it as one of the column statues of that set, although it also has some peculiarities that differentiate it from the rest of the pieces.
It represents a seated character, with a leg crossed showing his boots, holding a sheathed sword with his left hand, veiled by the cape, and a vertical scroll with his right hand. The image has been decapitated, thus being more difficult to be identified.
Based on its attributes and in relation to Mateo’s project, it has been considered to be a probable representation of Ferdinand II of Galicia and León; even most likely to be a Biblical King within the cover program.